This record is an album by Stephen Malkmus released on 2011. The album had produced by Beck. Maybe, this work is the best album in his career after the break up of Pavement.

The 1st song "Tigers" is so strange and so catchy. The 3rd "Senator" is  cool psychedelic punk. Outside him, nobody write such a song. And the 4th "Brain Gallop" is bluesy psychedelic rock. In this album, this song belike a Pavement's song.

In addition, Guitar sounds so good from start to finish. Beck is also the greatest as a producer! 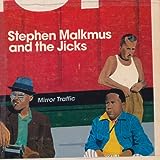