This is the best of funk music! This is the 4th album of American funk band Parliament  known historical masterpiece.

In the P-Funk project led by genius George Clinton, another band, Funkadelic is located on the rock side, whereas Parliament's works is perfect dance music with using horn sections and synths.

This album released in 1975 is a really great album. These songs have high quality and band members play so good. But not only that. I think this album has a special something. 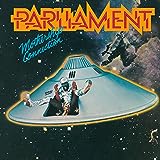