For the past few days, Funk music is booming in my head.

Red Hot Chili Peppers got into The Rock and Roll Hall of Fame, and they got Grammy Awards.

But their early years they were one of the coolest band in late 80's LA punk scene. And they were playing funk music influenced by jazz and soul music with excellent technic.

What an awesome band!

This third album released in 1987. It was the last album when the initial guitarist Hillel Slovak played in his lifetime.

The next guitarist John Frusciante is also great guitarist, and the band is releasing some great albums.

But this album is one of their highest point. That is because, the best work with Hillel Slovak. He is a genius guitarist of extraordinary.

All songs are great! I especially like the 4th song "Backwoods" and the 8th song "Special Secret Song Inside". They perform funk and rap by a style of hardcore-punk and play cool guitar like Jimi Hendrix on sometimes. 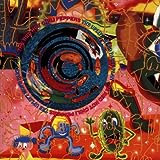