This album released in 1969 is their debut album.

Although this album is debut work, they had spent many sessions with various musicians before released.

Because so their performance is awsome. 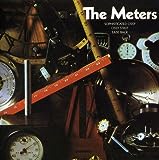